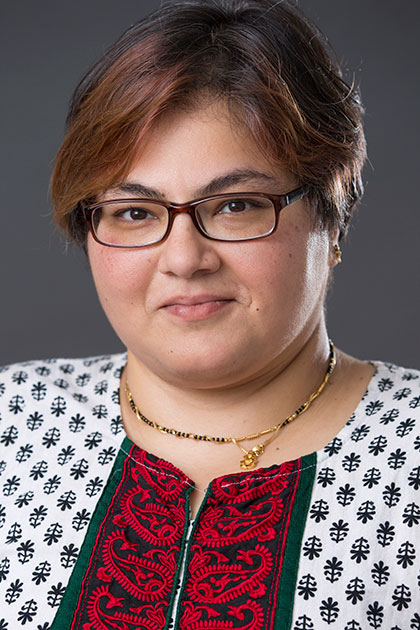 Hemali Phatnani, PhD, has joined the Eleanor and Lou Gehrig ALS Center, and the Center for Motor Neuron Biology and Disease at the Vagelos College of Physicians & Surgeons of Columbia University as Assistant Professor of Neurological Sciences in the Department of Neurology, in the Division of Neuromuscular Medicine. Dr. Phatnani has also been appointed as a CTNI Scholar in the Columbia Translational Neuroscience Initiative (CTNI).

Dr. Phatnani will retain a joint appointment at the New York Genome Center as the Director of the Center for Genomics of Neurodegenerative Disease. In that role, Dr. Phatnani established the NYGC ALS Consortium involving clinicians, scientists, geneticists, computational biologists and industry partners, providing a framework to apply clinical and functional genomics together with bioinformatics to study ALS disease mechanisms.

Her research focuses on gene regulatory mechanisms that underlie the complex interactions between motor neurons and non-neuronal cells in the brain and spinal cord of ALS patients and mouse models of disease. The goal of her research is to apply state-of-the-art genomics and bioinformatics to understand the role of cell-cell interactions in ALS pathophysiology.

As a postdoctoral fellow in the laboratory of Dr. Tom Maniatis at Harvard and Columbia Universities, Dr. Phatnani studied ALS disease mechanisms using stem cell-derived motor neurons and genomic profiling methods to study the complex interplay between motor neurons and astrocytes in ALS disease progression. She received her PhD in Biochemistry and Molecular Biology at Duke University, where she characterized the interactions between RNA polymerase and proteins involved in the mechanistic coupling of RNA transcription and processing. She earned a BSc degree in Life Sciences from Bombay University.