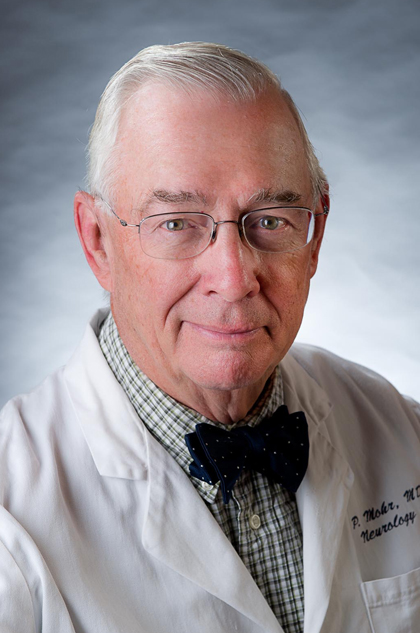 Dr. Mohr is from Lynchburg, Virginia, graduated from Virginia Episcopal School, Haverford College, and the University of Virgina where he was a USPHS 5-Year Plan Fellow and received an MS (Pharmacology) and MD. He trained in Medicine at the Mary Imogene Bassett Hospital, in Neurology at the New York Neurological Institute, and in Neuropathology and Stroke at the Massachusetts General Hospital (C.M. Fisher). After 3 years Army service at Walter Reed Army Institute of Research during the Vietnam War, he returned in 1971 to the Massachusetts General Hospital to found and direct the Stroke Service and the Neuro Intensive Care Unit, and the Neurology Unit at the Massachusetts Rehabilitation Hospital. He became founding Chairman of the Department of Neurology and the University of South Alabama, and returned in 1983 to the Neurological Institute as the first Sciarra Professor of Neurology and is now the Director of the newly-formed Doris and Stanley Tananbaum Stroke Center. He is author or co-author of a variety of peer-reviewed and invited publications and a few books.

Research is focused on clinical, radiologic and pathologic correlations of clinical stroke syndromes; doppler studies and cerebral hemodynamics of large-artery disease; arteriovenous malformations (AVMs); studies of the course and outcome of stroke and its various subtypes; cardiac and hematologic risk factors of stroke; and modification of stroke outcome by specific therapies tested in multi-center trials.

1978-83     Entire senior class in one month rotations for 10 months per year, ward and advanced neurology.

1978-83     Service director in charge of formulation of resident training program, approval by the Board of Psychiatry & Neurology for residency training program (approved 1979), weekly grand rounds and monthly journal club and research conference.

2009- Who’s Who in Healthcare and Medicine

2013- Top Neurologist in New York, NY in Leading Physicians of the World