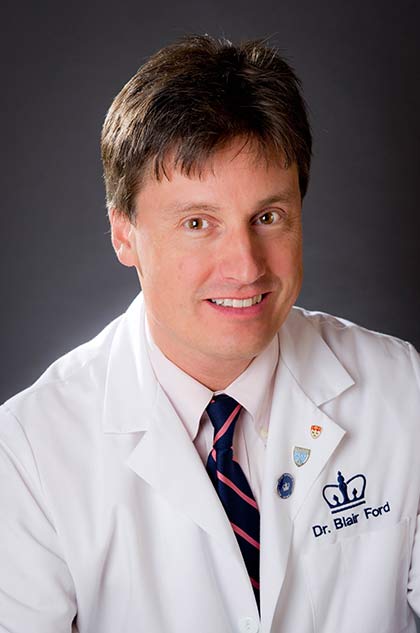 Dr. Ford is a clinician, medical educator and clinical-investigator whose practice and research focuses on Parkinson's disease and movement disorders, including tremor, dystonia, Tourette syndrome, myoclonus, ataxia and chorea. Trained in Canada and the US in Internal Medicine and Neurology, he is board-certified in both specialties. His primary clinical work and research involves neuromodulation treatment using deep brain stimulation for Parkinson's disease, tremor and dystonia. He serves as Medical Director for the Center for Neuromodulation and Movement Disorder Surgery, a collaboration between the Departments of Neurology and Neurological Surgery at Columbia University that he co-founded in 1997.

As an educator, Dr. Ford has held the leadership position of the Department’s main educational programs – the Neurology Clerkship and the Neurology Residency Program; in this latter role, he served as the national Chair of Neurology Residency Program directors. Currently, Dr. Ford is Program Director for Columbia’s Movement disorders fellowship. An innovative teacher who makes extensive use of video, Dr. Ford has won numerous education, including Vagelos Columbia College of Physicians & Surgeons Bohmfalk Award, the medical school’s highest recognition for excellence in clinical teaching. He has won both of the Department of Neurology’s highest teaching awards, the Steven Shafer Award for humanism, and the Lewis P. Rowland Award for clinical excellence.

Dr. Ford has served as an examiner for the American Board of Psychiatry and Neurology. A Fellow of the American Academy of Neurology and a member of the American Neurological Association, Dr. Ford served for two terms on the Education Committee of the American Academy of Neurology (AAN). He has contributed over 100 original articles, reviews, and book chapters to the literature. Dr. Ford has lectured extensively on topics ranging from movement disorders, clinical neuroanatomy, neuromodulation to medical education. He has reviewed articles for Archives of Neurology, Movement Disorders, Neurology and the New England Journal of Medicine. Dr. Ford served as Scientific Editor for the Parkinson's Disease Foundation and has been listed as one of America's Best Doctors since 2002.